It was the team’s annual Pink Out night with the girls wearing white uniforms with pink numbers and “Beat Cancer” in pink letters on the front of their jerseys. Shirts were available to purchase and there was also a raffle with 55 different prizes that donated by people and businesses in the community. Proceeds from the evening totaling more than $4,500 went to the American Cancer Society.

This was also the first year the boys basketball team found sponsors to pledge an amount of their choosing for every 3-pointer the girls and boys basketball teams made during the night and the girls made the money flow in quickly, making five 3-pointers in the game’s first four minutes to race out to a 17-1 lead.

Reese Spiegel and Macey Finlay connected from outside in the first minutes, then after an Ava Wolf layup, Spiegel and Finlay hit from deep again. Caroline Rogers added the fifth triple with 4:08 still showing on the first quarter clock.

In all, there were nine triples hit during the night for a total of $2,511.

This is the ninth time the Fillies have put on a Pink Out night and head coach Jon Weinrich said it’s also a benefit for his athletes.

“We preached to them that life is bigger than basketball,” Weinrich said. “We talked about fundraising. We know it’s not the most fun thing to do, but some of them may end up in sales or marketing and this would benefit them. We have done a lot and tried to take it all in.”

The Fillies led 21-4 after the first quarter and then Brooklen Black scored the first of her three field goals to start the second quarter. The senior point guard was named the evening’s Standout Athlete and said she is looking to be more of a scorer.

Black finished with six points, including a couple nice drives to the basket later in the game.

The Fillies ended up making eight 3-pointers for the game. Chloe Denton made two of them and Ava Wolf stepped out and hit one as well.

“The last two nights we have come out and hit some shots early,” Weinrich said. “Teams have been playing a lot of zone against us and packing it in and when we make that many 3-pointers early, teams have to adjust. We do it in practice a lot, so it’s nice to see in games.”

Shenandoah extended the lead to 37-7 at halftime and it was Wolf’s triple with 1:21 to play in the third quarter that pushed the margin above 35 and started the continuous clock.

It was the second straight night, the Fillies have beaten a struggling team and Weinrich said it’s been a good couple nights after suffering through a five game losing streak.

“Seeing the ball go in the hoop is good,” Weinrich said. “It makes the defense play harder and everyone likes winning. We have had a couple tough games and there are things we can do better, but we’re playing hard, their energy is up and people are happier, it’s been fun.”

“We suited everybody up on varsity because of pink out,” Weinrich said, “and a couple younger kids that aren’t on varsity got a couple points. The future is bright. We have five really good seniors, and then 11 underclassmen that can play. They have worked hard and done a lot of work, it’s nice to have them reap some of the benefits.”

Black and Spiegel scored six points each for the Fillies and Black said it’s all about a positive attitude for her team going forward.

“We need to be positive with each other and keep our confidence up,” Weinrich said. “We just need to keep a positive atmosphere and then everyone will be more positive, things will start rolling better and we’ll work better as a team.”

Shenandoah improved to 7-6 on the season and completed a season sweep of Red Oak with the win. The earlier meeting counted in the Hawkeye 10 Conference standings. Red Oak fell to 0-11 with the loss.

Next the Fillies look to complete the season sweep of their other big rival as they travel to Clarinda Friday.

There are more funds available for the Shenandoah wrestling program after earning pins at their home tournament last month.

SHENANDOAH – The Shenandoah boys basketball team had lots of trouble on the defensive glass, which led to several second chance points and a 5…

Cowgirls pull away from Clarinda in final quarter

SIDNEY – The Sidney Cowgirls outscored Clarinda 18-6 in the final quarter to pull away for a 49-34 win Thursday, Jan. 13.

SHENANDOAH – The Shenandoah Fillies earned a close win while the Mustangs closed well after a tough start in a split with St. Albert in the fi…

The schedule is set for the 2022 Corner Conference Basketball Tournament.

Brawl breaks out between Cowboys, 49ers fans outside AT&T Stadium

These rare photos show Tom Brady from his baseball days

These rare photos show Tom Brady from his baseball days 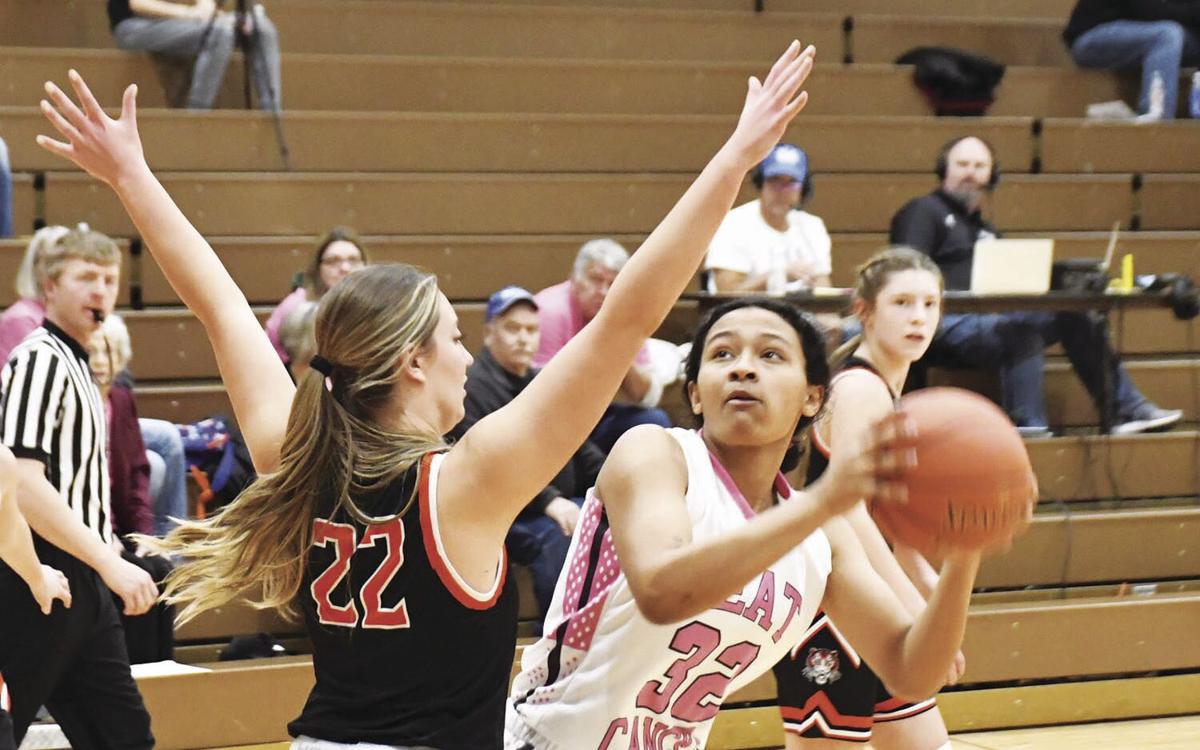 Shenandoah senior Allie Eveland glances at the basket while figuring out how to get the ball past Red Oak's Lennon O'Neal during the Fillies' win over the Tigers Tuesday, Jan. 11. Eveland scored two points and added six rebounds in the victory.

Members of the Shenandoah girls basketball team, boys basketball team and cheerleaders pose together for a picture during Shenandoah's annual Pink Out night Tuesday, Jan. 11, during the basketball doubleheader against Red Oak. More than $4,500 was raised for the American Cancer Society during the evening. Shirts and raffle tickets were available for purchase with 55 different prizes donated by 21 different people and businesses for the raffle. Also, the boys basketball team received sponsorships from 38 different people and businesses to give a certain amount for the each 3-point basket the Shenandoah teams made during the evening. Nine made triples results in more than $2,500.